AMRUTHA PLUS HEIGHT UP

AMRUTHA PLUS HEIGHT UP 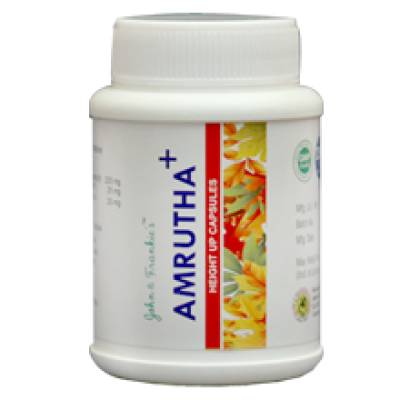 Growth and development depends on the release of growth hormone, secreted by anterior portion of the pituitary gland situated deep inside the brain. On an average children grows about two inches each year between the ages of three and early adolescence, release of growth hormone is at its peak at adolescence when accelerated growth occurs, but growth hormone levels fall steadily on reaching adulthood, and the body stops to increase height. Our body constantly generates Human growth hormone, throughout our life, thus maintaining the chemical balance in our body and most importantly carries out the process of cell rejuvenation persistently. Some individual related factors like improper nutrition, lack of sleep or parental pattern may hamper secretion of growth hormone. Catching the right nerve i.e. identifying and correcting the inhibiting factors may facilitate generation of growth hormone and positively influence the height. Studies reveal that it is not only the growth hormone which determines the height but its effect on development of 26 skeletal bones and the cartilaginous portions of 62 bones in the lower body. Pituitary gland stimulation increases release of hormones, which increases growth of cartilaginous portions in the bones of lower body and ultimately increases height. In children where Ossification process is yet to be  complete d,  nourishment  of  bony  and  cartilaginous tissues helps in lengthening of bones in lower body as well to some extent. The Ayurvedic unique formulation with the precious medicinal herbal extracts of :

Macuna Pruriens : a tropical legume also known as velvet bean, has been used by ancient healers and is making waves in the scientific community. In Mucuna pruriens, levodopa, or L-dopa, is one of the major compounds .This bioactive chemical is a precursor to several neurotransmitters, including adrenaline, noradrenaline, and dopamine. Mucuna pruriens has significant antioxidant action that works in tandem with L-dopa to pro- mote brain health. When L-dopa crosses the blood-brain barrier, it helps to increase brain lev- els of dopamine, an essential neurotransmitter associated with regulating mood and cognition. Research also suggests that antioxidants are help- ful for defending against oxidative damage by free radicals. Human Growth Hormone L- Dopa contains natural secretagogues which may support the body’s ability to stimulate the natural release of growth hormone. The blood carries the dopamine into the brain, where it naturally in- creases HGH production from the pituitary gland. The increased dopamine levels also optimize the production of other hormones, including testosterone, leading to increased sex drive and im- proved sexual performance for both men and women, beneficial in stimulating muscle growth, as well as burning fat from fat cells. Commifera Mukul, is native to India. This tree has been used in Ayurvedic medicine for centuries, and Ayurvedic texts dating back to 600 BC recommend it for treating atherosclerosis. Today guggul gum resin is use

Commifera Mukul: Is native to India. This tree has been used in Ayurvedic medicine for centuries, and Ayurvedic texts dating back to 600 BC recommend it for treating atherosclerosis. Today guggul gum resin is used for arthritis, lowering high cholesterol, “hardening of the arteries” (atherosclerosis), acne and other skin diseases, and weight loss. Guggul contains substances that lower cholesterol and triglycerides. One of these substances also decreases the redness and swell- ing that occurs in some types of acne. This helps in human height growth.

Asparagus racimosus: (Satavari) : The nourishing properties of Shatavari are used traditionally to support a number of systems and functions in the body includes soothing effect on the digestive tract, Healthy peristalsis of bowels, Moisturizing support of the respiratory tract, Promotes healthy energy levels and strength, Supports the immune system, Natural antioxidant properties, and etc., generates growth hormone and gives you a healthy growth. Kaunch beej, Arjuna and Amalaki are other important ingredients.

NO SIDE EFFECTS reported

Dosage : 1 Capsule each after breakfast and dinner with warm milk / water.