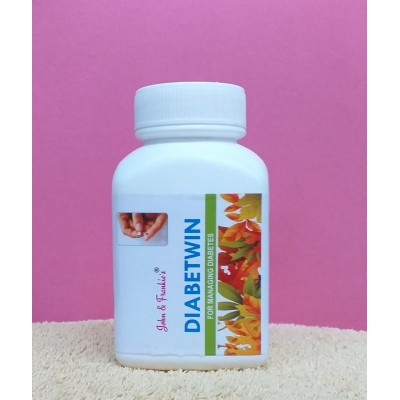 Diabetes is a chronic disorder affecting the population on epidemic level. Diabetes results from abnormal metabolism of insulin wherein insulin action is impaired, or absolute insulin deficiency results in imbalance of glucose metabolism and leads to a syndrome called diabetes mellitus.The composition of  Extracts of  the following herbs made an effective Ayurvedic Medicine for well managing the diabetes. : The ingredients are :

Gymnema sylvestre is regarded as one of the plants with potent anti diabetic properties. This plant is also used for controlling obesity in the form of Gymnema tea. The active compound of the plant is a group of acids termed as gymnemic acids. It has been observed that there could be a possible link between obesity, Gymnemic acids and diabetes. It possesses antimicrobial, anti hypercholesterolemic, hepatoprotective and sweet suppressing activities.

Eugenia Jambolana, ( jambul ) fruit can be a particular medication for diabetes sufferers because of its effect on the pancreas. Jambul seeds include a glycoside, called jamboline that obstructs the transformation of starch into sugar in cases of elevated blood sugar levels. In the management of this ailment, the seeds, fruits and also fruit juice each are useful. Jambul seeds have been discovered to boost the insulin secretion from the pancreas. Additionally, it reduces the unappeasable thirst. To deal with diabetic issues, the interior bark of the jambul tree can also be used. The dried bark is burnt off and ash of it needs to be provided to diabetic patient on empty stomach along with water daily each morning, afternoon as well as in the night.

Emblica officinalis, known as Amla  is a medicinal plant, used in Ayurveda for treating various diseases, one of which is diabetes mellitus. According to Ayurveda, amla balances all three doshas.  Its effects on blood glucose in humans has been established. It has been used in a combination supplement (alongside Bitter Gourd, Gurmur) The aqueous extract of the seeds of Emblica officinalis  was investigated for its anti-diabetic activity.

Trigonella Foenumgraceum, Known as Methika in Sanskrit and Ayurveda.  This is another plant from the widely used family of Fabaceae / leguminosae – related to chickpeas and peanuts and when you look closely at these tiny seeds,  Fenugreek is a herb that is widely used in cooking and as a traditional medicine for diabetes in Asia. A total of 10 trials were identified. Fenugreek significantly changed fasting blood glucose. The main action of fenugreek is as a digestive stimulant (Dipana), although it also has a specific action as a cardiac tonic and it pacifies Vata and Kapha.

Momoridica Charantia, also known as bitter milon. Bitter fruits are commonly used in cooking and as a natural remedy for treating diabetes. This plant has received the most attention for its anti-diabetic properties.  Its fruit is used for the treatment of diabetes and related conditions amongst the indigenous populations of Asia, South America, India and East Africa. Abundant pre-clinical studies have documented in the anti-diabetic and hypoglycaemic effects of M. charantia through various postulated mechanisms.

Withania Somnifera,  also known as  Ashwagandha is an adaptogenic herb.  Adaptogens are substances (a combination of amino acids, vitamins, and herbs)..  Ashwagandha has long been used as a remedy for diabetes in Ayurvedic medicine. Research on the use of Ashwagandha in the treatment of diabetes indicated positive results. Experiments showed that blood sugar levels during fasting and post-lunch decreased significantly when Ashwagandha was consumed for a period of four weeks.

Pterocarpus marsupium Roxb. is the only pure herb ever found to regenerate beta cells in the pancreas that produce, store and release the hormone insulin. Pterocarpus marsupium Roxb. is a very rich source of pterosupin, pterostilbene, marsupin and epicatechin which are highly effective blood glucose lowering compounds. P. marsupium Roxb. exhibits strong anti-diabetic, anti-oxidant and astringent properties used in the treatment of inflammation and non-insulin dependent diabetes mellitus (NIDDM).
The above formulation is very ideal and  useful for curing / managing type I and type II diabetes.  No side effects reported at all...
Let us kill the dragon of Diabetes naturally...... using SEVEN meraculous herbs....